Let me say up front I do not see the increased interest in microlearning as attributable to research in cognitive neuroscience but it is a logical extension of the Spacing Effect so I have included it as the third part of the Neuroscience series.

Microlearning deals with relatively small learning units and short-term learning activities. Generally, the term “microlearning” refers to micro-perspectives in the context of learning, education and training.

Will Thalheimer put more substance into his own definition published on his blog WorkLearning.

I want to focus here on how to incorporate microlearning into your instructional design process and therefore won’t spend time talking about what it is or its benefits. To get more information on microlearning there is a great article on the ATD website, Is Microlearning a Myth? by Sharon Boller.

From the instructional design perspective, microlearning results from chunking and deployment decisions. In other words, a traditional lesson can be broken down into microlearning units if those units can logically stand on their own. The chunking goal seems to be based on what the acceptable length for microlearning is perceived to be: five minutes, 10 minutes, etc. Some people even argue that the microlearning units must be short because the new generation of learners (not going to use the ‘M’ word) have a short attention span. I don’t buy that broad generalization about attention span. I have observed my kids and now grandkids totally focused on an activity to the degree you can’t get them to come for dinner and that focused attention can last an hour or more. So, it isn’t an issue with their attention span; more likely it is an issue with the learners’ perceived need for that content. It is up to instructional designers to provide a clear motivation for the learners. Remember the Systematic Learning Process or PAF? 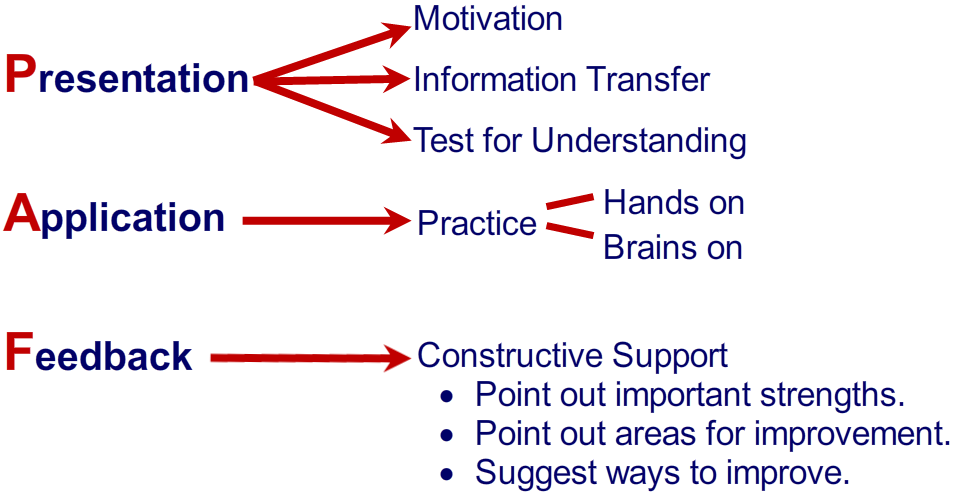 Click on Image to Enlarge
The first step in the PAF model is providing learner motivation, which we sometimes refer to as WII FM (What’s In It For Me?). To ensure the learners are motivated enough to focus on the content being presented, they must be shown what they will get out of it. Since all learning programs should be designed to improve job performance, designers can start with the objectives to determine how the content can help learners. The objectives give the clearest summary of the potential value learners will get from the learning chunk.

Some people suggest that you don’t need objectives for microlearning but I would argue that if there isn’t an objective—a described learning intent—it is not learning rather it is information. That is not to say a motivated person cannot learn if they are only given information. Clearly they can learn from just content and they do that all the time, but that moves it into the domain of informal learning.

Put that part of discussion aside and I would argue the best reason for a clear objective is that it can provide the best possible ’tag’ the leaner can use to find the learning content that aligns with their immediate need. If they see the need they have the answer to WIIFM and that is the motivation.

To take a more traditional learning program and deploy it as microlearning requires some repackaging.

Click on Image to Enlarge
The design, packaging and deployment of microlearning are some additional tools for the instructional designer. A traditional lesson could be broken up into microlearning with small logical chunks of content. These could include the testing for understanding (TFU) or the TFUs could be delivered in separate microlearning. This spacing could actually improve learning, and repeated TFUs, also spaced in time, could significantly reduce the forgetting curve.

There may be very good reasons to move longer learning packages into smaller ones but there must be an overall structure that positions how all the microlearning units fit together and support the performance of the job tasks. For example, if you are trying to teach new hires how to process a customer’s order, microlearning units could explain how to complete the various sections of the application. (These could also be used by experienced personnel who just need a refresher on one part of the application.) However, you would need to wrap these microlearning units in a package that covers all the skills and knowledge they will need to accurately and efficiently process the order. Perhaps structured on-the-job practice with feedback from a supervisor or designated coach would be enough support.

Microlearning may meet some of the organizations learning needs but not all. The critical skill for the instructional designer is deciding what content could be successfully delivered in this way.

Running Effective Meetings: Getting the Most Out of Your Meetings

Consulting Roles for L&D – Part One